In an age of homogenized design, the Ignis is unmistakably a Suzuki and, internally, it’s known as the company’s latest and most affordable “halo car” following yesteryear’s Swift and Baleno.

It’s the heart and soul of the company – no pun intended – and in its five years of planning it’s set to smoke the competition, leaving many in the dust and others out of production altogether. Yup, this car is that good – and per the company, the Ignis has multi-generational reach across buying demographics.

To be frank, it’s an odd looking car – no, not to the extent of Kia Soul-odd, but still funky to look at – and that’s a good thing. According to Suzuki, consumers and dealers love it, adding up to 50 confirmed orders during its launch week alone. It’s a fun car that gets you from point A to point B while showing off a lot of attitude in the process.

I must confess, when I first saw the Ignis my thinking was more along the lines of “what the hell is this Mini Cooper Countryman looking thing?” than instant appreciation, and it was only on a later press drive that I finally got what all the fuss was about. 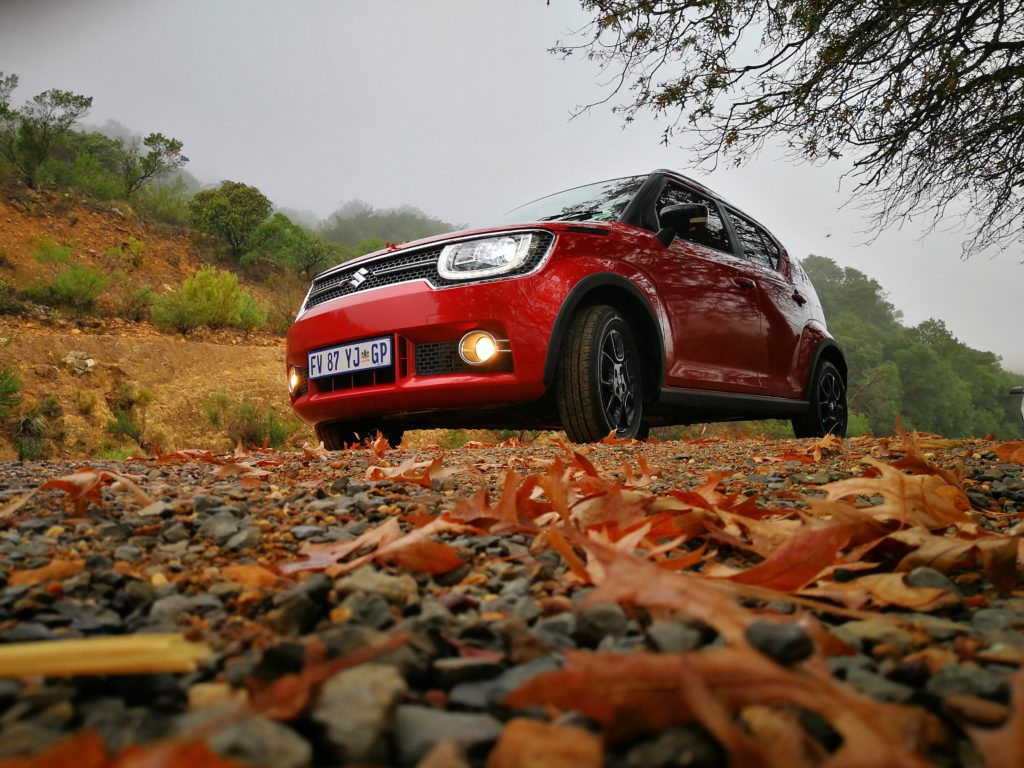 Did I mention that the Ignis is a fun and well-rounded car? Well, it’s all that and zippier to boot. All of the models feature a 1.2-liter  engine, mated in either Suzuki’s similarly new GL Manual or GLX Manual and GLX Automatic five speed transmission.

Whether we (myself and driving partner Wezile Bonani) were driving around the city in downtown Cape Town, cruising on the highway, or carving through roads clinging to the side of a mountain, the relatively new gearbox (previously used in the Swift 1.2) delivered faster and smoother shifts.

To be honest, though: the 5-speed is perky yet smooth with little kick from standstill. Our adventurous driving through the Cape winelands to the back country of Cape Town’s hilly roads demonstrated that the Ingis is more than sufficiently-equipped to satisfy my thirst for performance – and for the most part, I had to keep reminding myself that this is after all intended as a “ultra-compact crossover”.

The new engine is hands-down the biggest highlight of the Ignis, though to be fair it’s about damn time Suzuki put it to use. After all, it’s already powering the likes of the Swift as mentioned earlier.

Did I mention that the Ignis is a fun and well-rounded car?

For those really insistent on controlling the shift points on the auto verion, thankfully Suzuki didn’t leave you in the cold. A quick tap of the shifter to the right allows for manual gear shifting, though honestly it didn’t feel as quick as letting the transmitter do all the work. 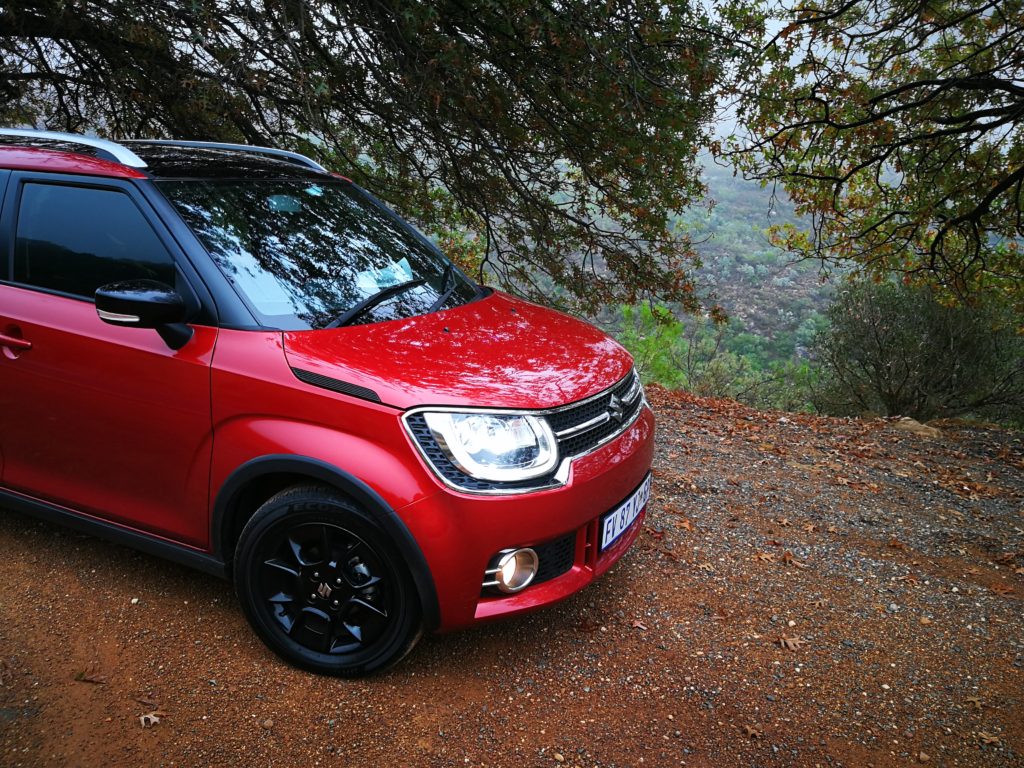 Suzuki also comes in with a new-generation, modular chassis, that then boosts the crossover’s low mass, while also offering a rigid platform. There’s also the generous 180 mm ground clearance confirms that the newcomer isn’t scared to get its boots dirty. My biggest complain is the size of the wheels, while its to understand that they are to optimise engine performance, they make the vehicle actually look light and a tad cheap as opposed to the ‘affordable’ we’re aiming for. 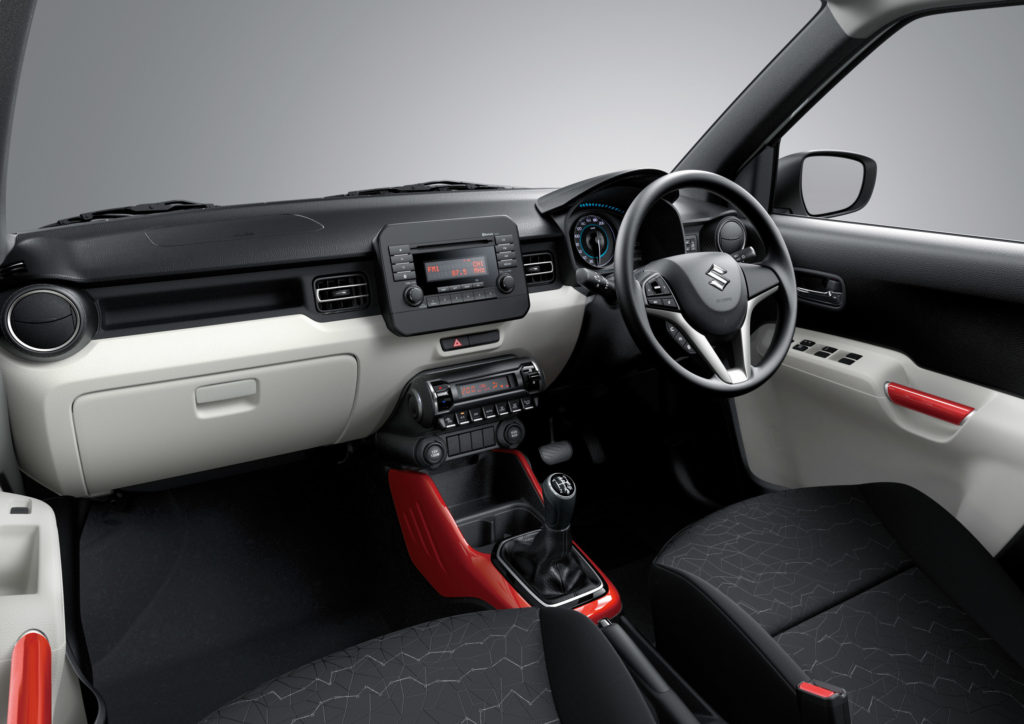 As for fuel economy, Suzuki claims that, you’ll get off with 5,1 litres/100 km in the case of manual gearbox models, and an even more frugal 4,9 litres/100 km for the automated manual model. That was proved correct during our drive.

Helping make you feel you’re really getting something for that premium, the GLX models come with additional exterior features such as new 15-inch alloy wheels, wheel arch and roof rails and chrome around the grille. The headlights and fog lamps get projector type LED’s. The exterior mirrors include turn signal repeaters.

Inside, a start/stop button confirms that the GLX offers keyless starting, while the air-conditioning features fully automatic climate control. The climate control switchgear is housed in an innovative, cylindrical housing. The Ignis is really that customisable. 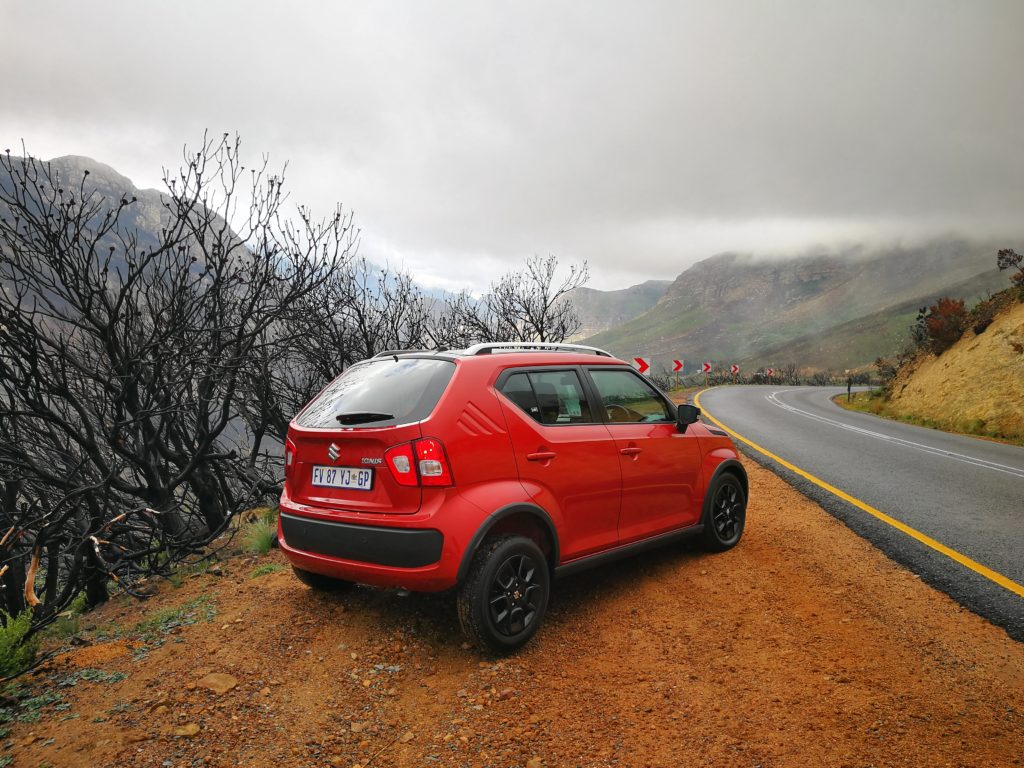 Even with all that, there’s really one main takeaway here. Courtesy of its 1.2l engine, the ignis takes a ultra compact utility vehicle with a premium interior and exterior, and injects a decent chunk of fun. If you’re looking for a more performance-oriented ltra- CUV, the Atios Cross and Sandero Stepway might sway you, but its mixture of perky practicality helps the new Suzuki Ignis stand out in a rising segment.

All the products Samsung launched last week & their prices

Fresh off the Samsung Unpacked virtual events held last week, Samsung South Africa has confirmed pricing of all the products …

Late last week the folks at Samsung finally took the wraps off their newest flagship, the Galaxy Note 20 series. …

You can now buy Huawei’s MateBook D laptops in SA

Huawei is going crazy for the remainder of 2020. Well, at least for its key markets. Today, the folks at …