Despite the fact that the Smart brand has pretty much been a flop here in the Mzansi (and understandably so) when it comes to sales, we saffas are slowly but surely warming up to intelligent little city cars.

Take for, instance, the Fiat 500, which got off to a slow start, and has gained traction locally; Opel and its push of the miniscule Corsa in all markets, and Chevrolet opening the gates on the Spark. But until widespread success in this segment is firmly on record, it’s no secret that automakers are hesitant to bring over their smallest offerings. It’s one thing to import hundred-thousand-dollar supercars, but when you’re trying to compete with a low-price-point product, additional import costs only hurt the business case.

Elsewhere around the globe, Volkswagen is enjoying success with its Up! minicar, the tiny run-about that was named 2012 World Car of the Year during the New York Auto Show. And since VW brought the Up! to the Mzansi, we’ve been wetting our lips to get a first drive in it. Volkswagen recently granted us that opportunity, and we are (to say the least) mighty impressed by this run-about.

We could litter this entire review with synonyms of “small” to describe the Up!’s stature, but we’ll put it in some better perspective for you – it’s nearly identical in size to the Fiat 500. The Up! is ever-so-slightly shorter in overall length, a tiny bit wider and 1.5 inches shorter in height, but rides on a wheelbase that’s a full 5.3 inches longer than the Fiat. 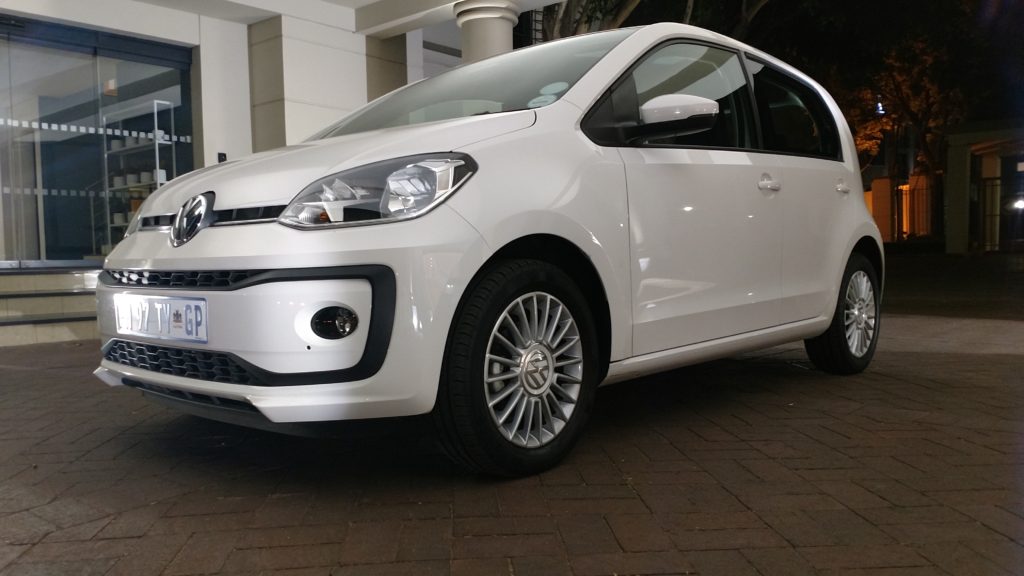 That added space between the axles not only gives the car the sort of short-overhang dimensions that we love, but aids massively in interior packaging efficiency. Attractive 15-inch alloy wheels fit snugly at all four corners, as well.

The end result is a small car that’s as cute as a button with not a single offensive styling element to our eyes. We like the way the grille forms a big grin around the painted front bumper and that same design element is mimicked at the rear. The Up! isn’t all bubbly like a Fiat 500, using more squared-off lines and a vertical glass hatch, but this lack of roundness goes the distance once you’re inside.

That interior is perhaps one of this UP’s biggest surprises, where Volkswagen decided to employ a straight-to-the-point, clean-and-simple, functional design scheme rather than some of the cheap designs found on other small cars that just turn out to be complete ergonomic messes. Directly in front of you is a flat-bottomed steering wheel with easily accessible audio controls that sits in front of a refreshingly basic instrument cluster. The only stalks and buttons within arm’s reach feature minimal amounts of functions. To your left is a small control unit for the climate and audio functions with minimal amounts of buttons and knobs. It’s all you need, and it works. 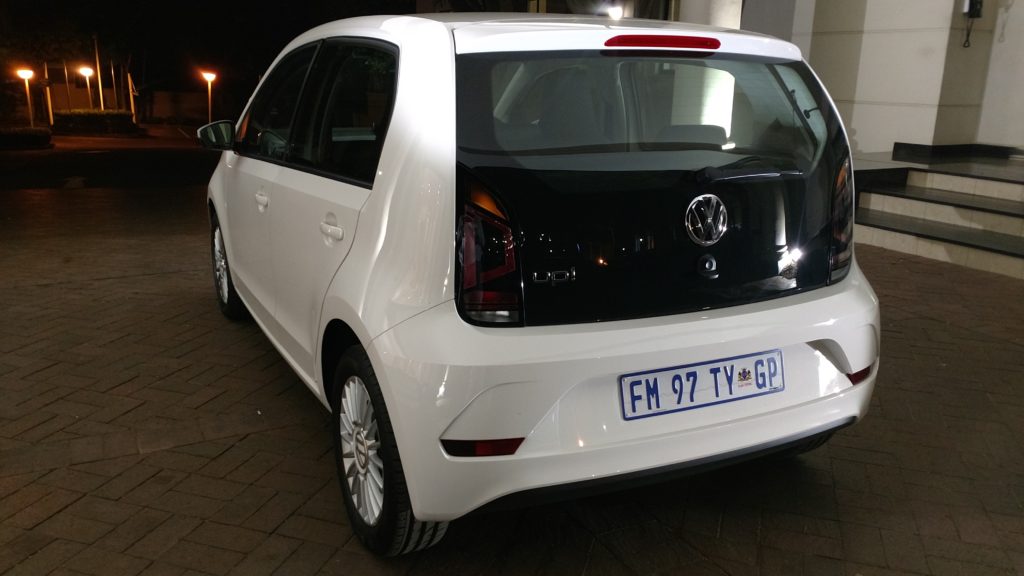 As for niceties, this Up! packs more goodies than you might think just by looking at the interior. The built-in entertainment system houses a whole host of features and wireless functionality, and those front cloth seats are even heated. They’re cushy, too, though we’d eagerly welcome some additional bolstering for our African-sized backs and thighs.

For the remainder of the interior, the theme is functionality above all else. There are plenty of storage cubbies to be found in the center stack, doors and even the sills that flank the rear bench. Speaking of which, we had no issues climbing behind the front seats, and because of the high position of the front chairs, there’s a good amount of toe room to keep you comfortable if you are forced into the back. Just don’t ask me to sit in there.

We packed four adults into the Up! at one point without a single gripe to be heard.

All in, the Up! offers a better-appointed and more spacious interior than what we find in the Fiat 500 or Chevrolet Spark, proving that while we can gripe all we want about the cost-cutting found in the Polo cabin, Volkswagen does still know how to make a premium small car interior. 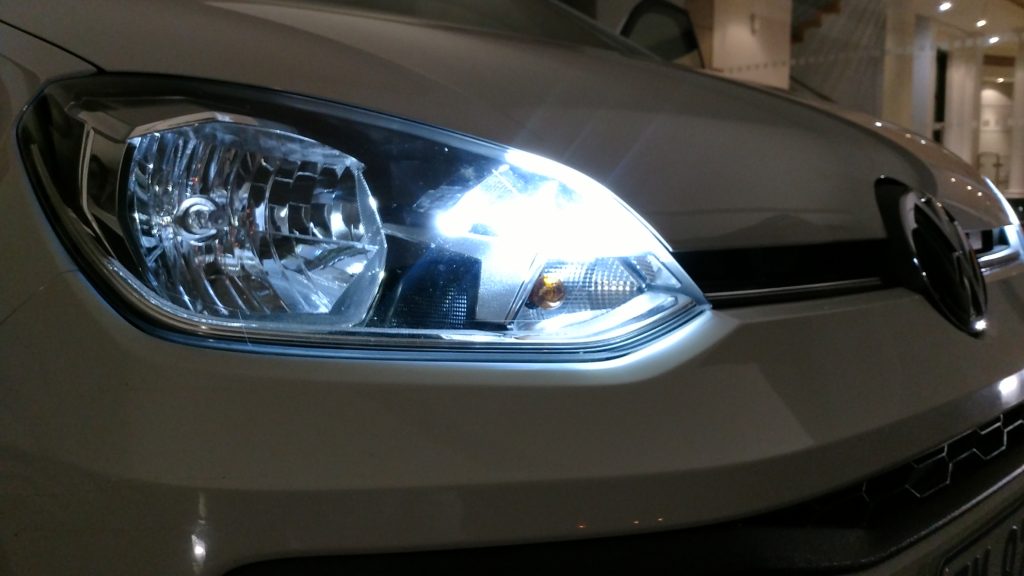 The automaker has employed a 1.0-liter three-cylinder engine here in the Up!, good for 55KW of power and 95Nm of torque. Miniscule numbers, no doubt, but it’s fine for this five-door hatchback. It’s certainly not fast, this Up! – hitting 100km per hour will take you a full 13 seconds (yes, even the Nissan leaf is quicker) – but it isn’t a total slowpoke, either. Being able to row your own gears with the five-speed manual transmission helps make the most of the limited power, too.

That said, the driving experience was not quite what we expected… in a good way. The Up! may use a perol-fed inline-three, but it has diesel-like characteristics – everything from the sound it makes to the power delivery. First gear is short and you’ll want to shift sooner rather than later, but once you’ve plunked into second, there’s a good deal of low-end grunt to get you going. The same goes for third gear, and the final two cogs are merely there to keep the revs down when you’re cruising. 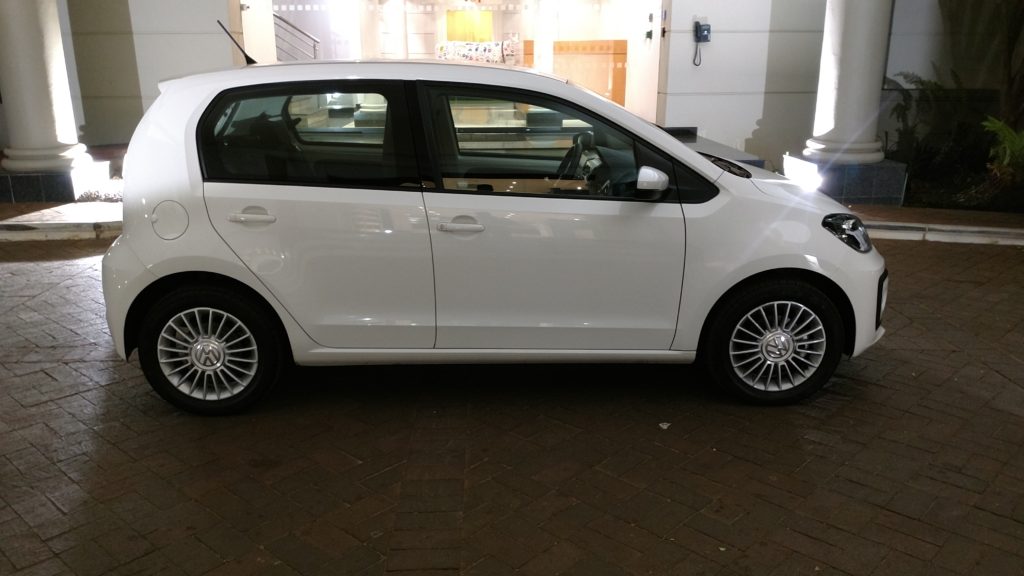 The transmission itself is nicely tuned, though like many other Volkswagens, the clutch is a bit vague. The gearbox itself offers solid engagement, and while we can see the argument for wanting shorter throws while shifting, they don’t feel unusually or unpleasantly long.

Even after you’ve counted to 13 and are coasting at 110 km/h, the Move Up! doesn’t tremble at the idea of being pushed farther. We had no issues cruising at 120 km/h, and while driving through one heck of a windstorm (we’re exaggerating here), the little Up! held its own with confidence and poise on the wide freeways surrounding Detroit. The upright design and low weight does mean there’s a tendency to be tossed around by strong crosswinds, and even during pleasant weather, wind noise is no stranger in the spacious cabin. 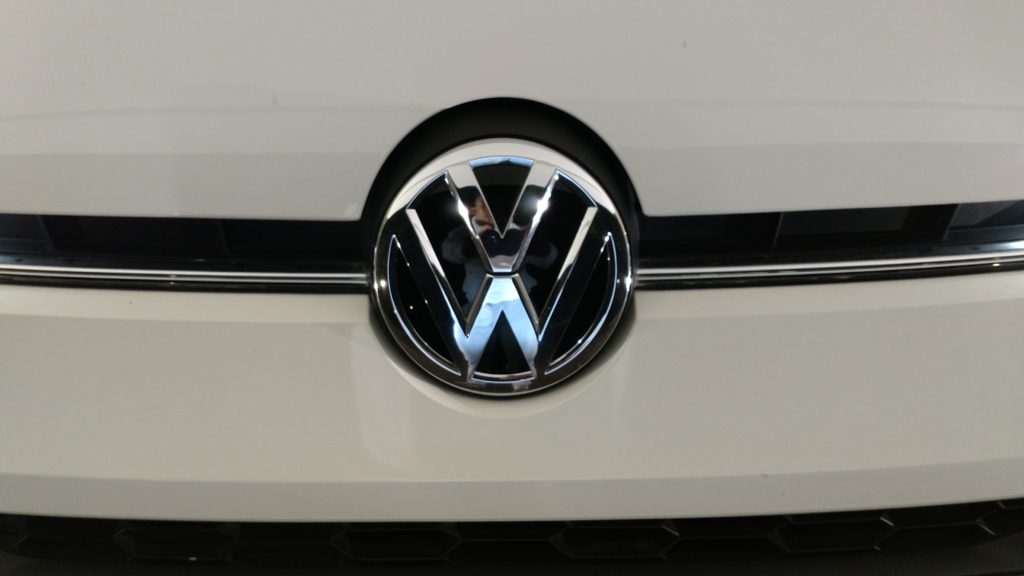 As for fuel economy, the Move Up! absolutely excels here. The Up! boasts city/highway numbers of 4.6l per 100km. During our few days of driving, we had no problem coasting just by the 4.3l mark, making that absolutely best-in-class by a long shot compared to what’s available here.

But what really sweetens this deal is just how rewarding the Move Up! is to drive. The steering is direct and linear, with good on-center feel and plenty of feedback. It’s worlds better than what the Fiat offers. You run into a few issues with the short wheelbase when driving over uneven road surfaces – the Up! will bounce around a bit – but it’s nothing unexpected for a car this size. Beyond that, the Up! offers a comfortable cruising ride for long drives on the highway. Once you’re on twisty roads, don’t be alarmed if you experience some body roll and under steer built in to the front-wheel-drive chassis, but again, it’s nothing out of the ordinary for small cars.

But here’s where this delicious piece of bite-size forbidden fruit turns bittersweet; the pricing issue. Our test Move Up! is set at a R179 900 price point, setting it higher than the recently launched Suzuki Ignis we so love. And even so, it’s better than the lot of what’s offered in this country. In fact, the li’l Move Up! could even give larger cars like the Honda Jazz, Renault Kwid or Toyota Atios a run for their money in terms of overall driver involvement.

WIN with TWFLD and KFC

In a special tribute to 50 years of sharing its famous Original Recipe in South Africa, not only did KFC …

The Mazda CX-30 is resetting the crossover balance, here’s why

Its rather interesting how somewhere along the line crossovers turned into “just smaller SUVs,” and the 2021 Mazda CX-30 isn’t …

Buying new or used. Which is better?

There's something special, and tempting, about getting a brand new car. No one else has played street-racer, forced the glove …